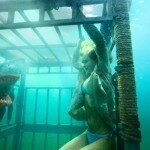 An interesting selection of films for general and limited release this week, but The Twilight Saga: Breaking Dawn Part 1 will blow most of the top ten out of the water. Moneyball could be the only film to cause any threat in its first week. Burning Man with Matthew Goode (Watchmen) and documentary The Tall Man have received praise as welcome strength for Australian cinema, while Tilda Swinton’s Cannes-screened We Need To Talk About Kevin is another well-received release.