And you thought the first one was gross...

While its revolting premise and some ingenious marketing has earned The Human Centipede much notoriety online, the 2009 Dutch horror film about three unfortunate tourists sewn anus to mouth by a maniacal German scientist isn’t really all that difficult to stomach. Indeed, the relatively small amount of gore and bodily fluids that director Tom Six actually depicts in the film – along with the general crumbiness of the dialogue, plotting, acting and directing – left many horror aficionados, myself included, feeling extraordinarily underwhelmed. Not so with the sequel. No matter what your feelings towards the first film, I can almost guarantee that the newly released film – fully entitled The Human Centipede Part 2: Full Sequence – will not underwhelm. The Human Centipede Part 2 is repulsive. Gleefully, nastily, unrepentantly repulsive. It also ain’t half bad.

The sequel picks up exactly where the first film left off. Indeed, instead of a title card, we are offered a small segment of the first films’ end credits, which are then rewound as we realise that we are watching someone else watching The Human Centipede. That someone is Martin (Laurence R. Harvey), a short, sweaty, mentally disabled English security guard, whose obsession with Six’s film, along with a long history of sexual abuse at the hands his now imprisoned father, and the homicidal tendencies of his frail but vicious mother all accumulate in Martin attempting to create a centipede of his own. And for all his shortcomings both physical and psychological, one thing that cannot be said about Martin is that he is unambitious. Where his hero Dr. Heiter was satisfied with three segments, Martin’s centipede is to be made up of twelve.

The first notable thing about The Human Centipede Part 2 is how much more competently made it is than the original. The 2009 film was shoddily shot and atrociously written, with only a few moments of genuine suspense or horror. By comparison, this follow up could almost be described as elegant. Six’s decision to shoot in black and white may well been motivated by a desire to mask the less-than-convincing special effects (if so, it worked: the gore looks hideously real), but it also gives the film a gritty edge that is befitting of such a tale. Pale white skin and eyes stretched wide in terror strike unsettling contrast against ever flowing streams of rain and blood, each as black as pitch. The soundtrack grinds and rumbles like a great mechanical storm, laying on a thick layer of tension and deathly anticipation that was totally absent from the first film, but dominates the first half of the second.

Admittedly, Six’s writing is not amongst the list of the things that have improved between the films. The dialogue delivered by the supporting characters – mostly played by less than stellar actors – is generally quite cringe-worthy. But on the whole, there is blessedly little dialogue in The Human Centipede Part 2. After all, a majority of the films characters spent most of their screen time with their, uh, mouths full. And in another particularly audacious and superbly successful gamble, the film’s protagonist (if you can call him that) never utters a word. Rather than attempt to one-up the comically over-the-top villainy of Dieter Laser as Dr. Heiter, Six has taken his new amateur surgeon in a totally different direction.

Where Heiter was tall and skinny with angular features, Martin is short and fat, with a face that puffs and bulges like dough. Where Heiter might be considered a mad genius, Martin is a barely functioning psychological cripple. Where Heiter was evil, Martin is sick. And where Heiter espoused his intentions at great lengths, Martin communicates only with a series of high-pitched squeals that burst from his lips whenever he becomes excited. Martin is one of the most excellent villains in recent cinema history; menacing, gross and totally without mercy, yet also somehow sympathetic. And Lawrence’s performance – his first, and one that requires him to frequently go naked, don a prosthetic penis and simulate acts that are morally reprehensible and deeply traumatizing – is for my money the bravest, most committed, and most memorable performance of the year. 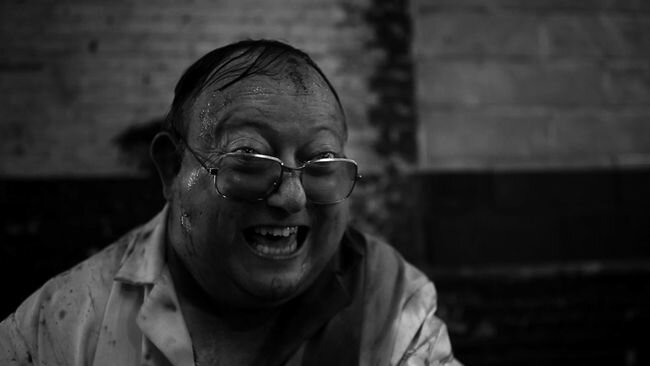 The second half of the film is where things get really nasty. Once he has acquired his subjects – mostly unfortunate souls who made the mistake of using the multi-storied car-park where this wannabe Frankenstein works – Martin sets about the task of linking his creation together. But while Heiter was a trained surgeon gone bad, Martin’s only training is comes from his compulsive re-watching of his favourite movie. Again, I must stress, the graphicness of this film cannot be overstated. As Martin goes about hammering out teeth, scissoring through tendons and staple-gunning the centipede together – all of which is depicted unflinchingly and at extensive length – audience members may find themselves feeling the involuntary urge to empty their stomachs. Incidentally, in a great piece of marketing, viewers at my screening were presented with a complimentary puke bag, emblazoned with an image of Martin and a single word: “sick”.

But the construction is only the beginning. Once the centipede is on its feet, Martin needs to feed it. Dog food laced with laxatives makes for an appropriate meal, and soon shit is spraying from any and all unplugged holes, splattering across the room and the camera, the only substance in the movie not restricted to black and white. These moments, along with some ridiculous sequences of violence (including a scene involving a new born baby that needs to be seen to be believed) are played for outrageous black comedy, and will provoke disbelieving squeals of laughter. Other moments – most notably a hideous rape scene – will be received in silence. Yet even when the film is viscerally disturbing, there is undeniably talent on display. The gore is completely convincing, and the concepts are audacious in their own disgustingly original way.  And the sound effects – the screams and the squelches – will linger long after the move comes to an end.

Of course even when you question the morality of the film, it’s abundantly clear that Six intends everything as tongue-in-cheek. From homages to Alfred Hitchcock’s Psycho to the satirising of Freudian psycho-analyses (via a beared psychiatrist who attempts to both diagnose and molest Martin, only to end up one of his victims), The Human Centipede Part 2 is blatantly self-aware, and uses its status as a meta film to comment not only on the reception and notoriety of its predecessor, but also on violence in cinema in general, and the contentious argument that it somehow can be blamed for violence in real life. If we take this film to be real life, then the original Human Centipede – and by extension, the viewers who elevated it to a cultural phenomenon – could be considered responsible for the crimes that Martin commits.

And so Six punishes. He punishes the characters in the film – supposedly real people – with a torture more hideous than most normal human beings could imagine. He punishes audience members – especially those people who were disappointed by the lack of gore in the original film – by offering us a sequel more graphic than we could have possibly desired. And, in a brilliant plot point, he punishes one of the actresses from the original film for taking part in the project at all. Posing as a casting agent for an upcoming Quentin Tarantino movie, Martin lures actress Ashlynn Yennie, star of the first movie, to London, and forces her to re-enact her career defining role.

The Human Centipede Part 2: Full Sequence is not what you’d call an enjoyable film, and the social commentary it attempts is handled with about the same finesse at the titular creatures’ creation. Nevertheless, it is a film – a fictional one – and those who call for the movies’ censorship would do well to remember that fact. If you don’t want to watch Six’s movie, then don’t. You won’t regret your decision. But for fans of graphic horror films, The Human Centipede Part 2 offers great gore, a fantastic villain, and some genuinely interesting ideas to devour.

Note: The Human Centipede Part 2: Full Sequence received a brief theatrical release in Australia this November with an R18+ rating, before it was reviewed and reclassified RC (refused classification) by the Australian Classification Review Board at the behest of conservative lobby groups and the New South Wales Attorney General. An RC rating is tantamount to a ban, and means the film cannot be screened, sold or hired anywhere within Australia. An edited version of the film, with approximately thirty seconds of footage removed, recently received an R18+, and is due to return to screens in December. The following review is of the full version of the film, which cannot currently be legally obtained in this country.