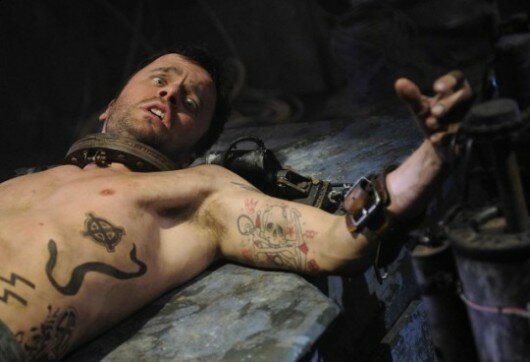 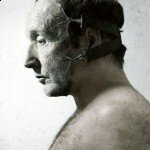 Within the opening 5 minutes, I already had my rating for Saw V figured out. No, I didn’t stop watching the film at this point like Roger Ebert remorsefully did recently. I watched it throughout, but like I predicted, my rating stated exactly the same. I was able to do this because I knew exactly what to expect after seeing the opening “game”. You see, being the 4th sequel, It doesn’t take a genius to notice that every Saw film has followed the exact same formula…and it’s becoming increasingly more tenuous and tedious. Fittingly, a tape recording in Saw V recites the old adage;

Did they really think they were going to fool anyone five times?

As always, the film opens with an intricate trap that forces its captives to endure a tremendous amount of pain in order to escape an impending death, this time involving a gradually lowering pendulum blade. These traps are tailored specifically to teach the victim a lesson, forcing them to face up to a sin of their past and bear disfigurement as a consequence if they are capable of surviving. The mastermind behind the series of traps, a now deceased Jonathan Kramer aka Jigsaw (Tobin Bell), has left his legacy to corrupt detective Mark Hoffman (Costas Mandylor) whom had designed a new ‘game’ for five new victims. However, FBI Agent Peter Strahm (Scott Patterson) is convinced Hoffman is not the hero who stopped Jigsaw like everyone has made him out to be and attempts to uncover the truth before more people fall victim to his sadistic games. 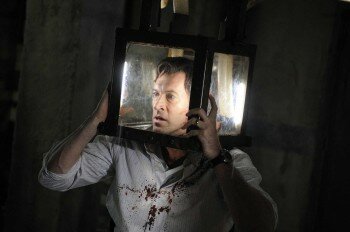 If you haven’t seen the previous films, don’t even consider seeing Saw V. Understanding this film is heavily reliant on a presumed knowledge of the previous films in the series. The characters, events and plot points are all carried through from the first four films without a moment of reiteration. However, even those who have seen the previous films might want to have a quick look over each synopsis on Wikipedia should they want to have the foggiest of what’s going on. Seriously, would it have hurt to give the audience a refresher instead of jumping straight in where the last film left off? After four films spanning 4 years, all of which pride themselves on being confusingly non-chronological, excuse me for forgetting a thing or two. In any case, the story itself is simply another cat and mouse game between the detective and the killer all of which coincides with a primary “game” being played out by between new victims. Sound familiar? Does to me. Following the same old pattern, Saw V continues down the path of being glaringly predictable and frustratingly improbable. Sure, I didn’t see the twist coming in the original Saw or even Saw II, but now it has become old hat. I’m convinced that the best twist would have been if the film stopped trying to include twists.

Saw V also falls victim to a recent trend in horror films where its only scares come from the high level of gore. The blood seems to be spilled far more frequently and freely in this sequel, possibly trying to mask the fact that the backbone of the series success, the admittedly well conceived antagonist Jigsaw, is hardly as mysterious or frightening when he’s dead. His protégé Mark Hoffman (Costas Mandylor) isn’t nearly as terrifying or enigmatic as Tobin Bell’s sadistic character. I also find it hard to  support the protagonists Agent Strahm and his boss Dan Erikson, as I firmly believe that they deserve everything they get if they continue to wander down alone into the basement of a serial killer without once calling for support. It’s also difficult to feel any sympathy for the group of victims and their situation when the only thing you know about them is the method of which they meet their gruesome doom. It’s yet another reminder that, ultimately, the biggest victim here is the audience.