Don't judge a movie by its poster.... 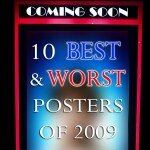 Movie posters have the power to make or break a films success at the box office, so it’s important to get it right.

However, designing a poster that is striking, attractive and, most importantly, makes you moviegoers actually want to see the film being advertised is no easy task. Yet these ten posters from 2009 were able to rise above  medicority and do exactly that. On page two, we showcase the other end of the spectrum and list off ten posters that seriously missed the mark.

To see a poster full-size, click on the image.

There is so much tension within the imagery of this poster you could almost cut it with a knife. In fact, the poster already does that for you; the subtle misalignment of Natalie Portman speaks volumes about the ruptured relationship that sits central to the film. It’s all very unnerving, but in the best kind of way.

The Hurt Locker is a movie about defusing bombs. Really nasty looking bombs at that. Unlike the confusing theatrical poster, this teaser gets that point across loud and clear without sacrificing style. Inject a hint of humour in the tagline and you’ve got yourself a great poster for a great movie.

This is a fantastic example of clean, minimalist design; not a single photograph to speak of, yet the message remains instantly interpretable. It’s also quite funny.  Shame the movie didn’t follow suit.

Not only is this poster downright mesmerising, it’s highly relevant to the film. Beyond the fact that the dizzying rings are shaped like a moon (duh!), it places Sam Rockwell smack bang in the center, just as he is the sole focus of the movie. His character’s life is defined by repetition, which if you’ve seen the film, has multiple meanings.  Ultimately though, it’s the hypnotic beauty of the image that truly makes this poster shine.

A woeful excuse for a movie, but this teaser poster certainly grabs your attention by the balls. No title, no tagline, no actors – merely an unnerving image of Jason Voorhees’ iconic hockey mask emerging from the darkness (he has a habit of doing that). That and a release date that says everything it needs to: Friday February 13th, 2009.

Inglourious Basterds had a fantastic advertising campaign all round, but this poster gets right down to business; a bloodied baseball bat and a Nazi helmet. It’s striking, twisted and gory. Thus, it could only be advertising a film by Quentin Tarantino. As one of few auteurs working in Hollywood, that’s a big selling point.

Up in the Air

It’s incredibly  rare for a movie to feature someone with as much star power as George Clooney and not feature his handsome mug front and center on the poster. But that would have been contrary to what Up in the Air thematically explores. The film is all about 21st century isolation; the way the window panels separate each faceless figure is not accidental. Nor is the gaping space above them, which could connote their speck-like insignificance in a globalised world. I could go on praising the deliberate symmetry, witty tagline and hypothesise as to why there is a tiny bird in the top right of the picture, but I won’t. Just know that this poster is fantastic.

The House of the Devil

They don’t make ‘em like they used to.  Hand drawn/painted posters are few and far between nowadays, yet this poster for The House of the Devil doesn’t just get points for being a rarity. It’s also damn good.
The eerie image of the burning house and the shadowy outline of the bloodied woman seamlessly overlap. It really is a beautiful composition. But it’s the typography that really takes this poster to another level; nothing is creepier than a smudged, distorted hand-written title. NOTHING.

This is the kind of poster I would be proud to have hanging on my wall. Not only does it vividly recreate the beautiful imagery from the original graphic novel, it does it with such meticulous style. It takes a single, frenetic moment in time and suspends it with such harmonious beauty. Also, not many movie posters can get away with intense yellow typography. This poster doesn’t only get away with it,  it goes ahead and makes it look insanely cool.

Why this poster wasn’t used more prominently to promote A Christmas Carol is beyond me. I first saw the design while flipping through a magazine, and I literally stopped dead on the page to gawp at it.  If that’s not effective advertising, I don’t know what is. The striking orange flame against the wash of negative black space is stunning. The fluid manner in which it highlights Scrooge’s face is flawless.  It’s also quite ominous,  just like the film.

To see a poster full-size, click on the image.

With the best out of the way,  it’s now time to grab that bloodied Nazi-bashing bat from the Inglourious Basterds poster and do some damage.

Be it because they are poorly designed, unappealing,  unoriginal or simply feature the mug of an actor I  detest, here are the ten worst movie posters of 2009.

I admit it’s kind of quirky, but as it turns out, it’s also a complete rip-off.

… and this really doesn’t. It’s about as bland as the tagline ‘a new comedy’.

Much like the film, this poster is an absolute mess.  Not only is the text at the top borderline illegible, it’s simply a mash of floating heads and objects. Where is the focal point? Why are there jellyfish attacking Parliament?  More importantly, why does Lily Cole look like some gremlin being lugged around by Heath Ledger?

You alien buffoons; your petty spaceships are no match for Dwayne Johnson’s gigantic head! Not only will he head-but your ships out of orbit, he’ll charge you extra on your cab fare! Muhahaha!

Cameron Diaz’s floating head looks worried; perhaps she just spotted a poster on her left that actually has an ounce of originality to it?  Or perhaps she realised the big red paint strike across her face reminds us of M. Night Shamalyan’s The Village? Yikes, not the kind of association that sells tickets.

For Nicolas Cage, the tagline “What happens when the numbers run out?” stopped being a hypothetical question when he went bankrupt.

Jokes aside, it wouldn’t be a list of bad posters if Nic Cage didn’t make an appearance. This time, his heavily air-brushed head is hovering above the apocalypse, looking suspiciously calm given the events taking place below. I’ve been trying to tell people for years the world would explode if they kept watching Nic Cage movies.

Ghosts of Girlfriends Past

Stars placed back to back on a rom-com poster? How so very original.
But more to the point, just look at that smug bastard. Now I’m sure McConaughey is a lovely guy, but that face of his is just. so. hittable.

I Love You, Beth Cooper

Paul Rust, what on earth are you doing back there? Put it away, boy.

Also, why do Hayden Panettiere’s arms look a bit like they’ve been mangled in a car door? Come to think of it, is that even her body? Her head looks like a magazine cut-out which has then been glued onto the page. Weird.

I bet the design team thought they were being super cool and edgy by enlarging the first letters of Fired Up. Because, you know, there’s nothing like saying a big ‘F U!’ to moviegoers. It makes us really keen to see the movie….

So there you have it! Think we missed a gem or forgot to mention a steamer? Let us know by leaving a comment below!

Want more? Check out our list of 08s best and worst posters.

Glamour of the Globes